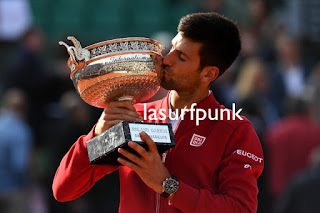 WHAT CAUGHT OUR ATTENTION: Novak and Rafa were the only ones with these wicked cross-court backhands that would barely kiss the insides of the service lines; they were fast and hard. These two could hit them all day long and not be called out---which was just AMAZING!!! And, these two played so fast; they would take their opponents by surprise on how fast they played their games--- before the opponent knew it, the score was 1-5 in Novak and Rafa's favor. They still do it and they are even faster today!!!

It was that year (2004) when we hitched our ardent fan trailer to Nole Cakes and have NEVER looked back!!!!

We remember in 2007, Djokovic was in the finals against Federer at the US Open. He lost but we just knew he would keep getting better and better then he would win majors.

In 2011, Novak's major turning point came when he OVERCAME two match points in the semi-finals against Federer at the US Open. He won that semi then he won the final to take his first US Open in 2011. Anybody remember how PISSED Federer was (and the fans and media always report how humble and gracious Roger is/was---NOT!!!!).

Yesterday's 2016 Roland Garros win for Novak made us so proud,  We cried some happy tears for our guy. We know how hard and elusive this French Open title has been to him. He has made us proud!!!