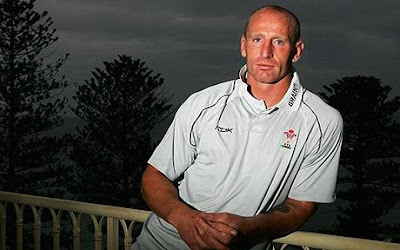 Openly gay footballer Gareth Thomas was taunted with homophobic chants by the opposing team's fans.  Well, the team with the asswipe fans were charged 40,000 pounds.
Maybe sporting arenas will be more aggressive in managing outrageous and caddish behavior at these events!!
The Yorkshire club was punished by the Rugby Football League (RFL) for the abuse Thomas received from its supporters at a March 26th match against the Crusaders. A statement from the RFL said: "Castleford were found guilty of unacceptable behaviour, of breaching the RFL's respect policy, of misconduct by their supporters and of conduct prejudicial to the interests of the sport. "The tribunal was chaired by his Honour Judge Rodney Grant, who criticised the club for failing to take steps to stop the homophobic chanting, for failing to identify the perpetrators, for failing to challenge the chanting and for their failure to undertake a meaningful inquiry afterwards." The March game was Thomas' second for the Crusaders after he switched from rugby union to rugby league.
Of course, one can't expect a team to manage its fans but at least it's a start and it sends a message that unruly behavior will be punished.
The team will appeal the fine, of course.
Posted by LA*SURFPUNK at 9:29 AM