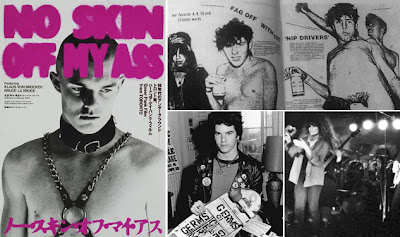 Gay punk started in the late seventies within the punk movement.

With bands like The Germs holding down the west coast and The New York Dolls fronting the East coast, Austin was a hotbed of gay punk bringing anarchy and independence from the Gulf Coast.
We were in our element.
We felt tough. A no-name white t-shirt, safety pins and real razor blades (don't fuck with us) on our biker jackets. Our shredded or mechanic-greased up Levis and Doc Martins rounded out our look. OMG, don't forget all those small circular buttons that we pinned everywhere and to everything!! (Yet, during the days, we donned a polo by Lacoste or Ralph Lauren with topsiders or Bass Weejuns and Crazy Colour for our hair). That's what was great about the early Eighties. The two scenes meshed and intermingled. The punks talked to the preps and vice-versa with no animosity. The talk usually started with sharing cigarettes. And, each group adopted one or two elements of their looks from each other. We completely transitioned between two different scenes seamlessly. We felt free for the first time. No rules; no one to answer to. That was the Eighties.
We cemented our nights getting DRUNK (not much different from today) and going to see bands like The Dicks along with whatever band, like Black Flag (we had/still have a huge crush on Henry Rollins) or the Dead Kennedys, that happened to be passing though our cool, liberal college town.
We would play "open-mic" nights with friends. Changing the name of our band at each gig because we could never come to an agreement on a name we liked. We strummed our guitar with a catchy tune or snapped the chords to an angry rhythm while screaming lyrics about lost love with a boy. The best part of doing it was the endless liquor and catching the eye of a cute hot guy (usually preppy, ehhhhhhh) and taking him along for the night. That's why we played!!
Which brings us to the whole point of that intro:
OUT magazine has an enlightening article with sound bites from people in the bands that were the gay punks, Queer to the Core.
It is nice to be enlightened as to what was going on behind the scenes and in their heads with what we were seeing on stage.

There was a gay element to early punk, such as the Los Angeles group The Germs -- whose singer was the closeted Darby Crash—as well as Seattle transplants The Screamers, The Apostles in the U.K., and, in Texas, The Dicks. The original scene encompassed a proto-stage of what would become Queercore.
Posted by LASURFPUNK at 6:36 PM