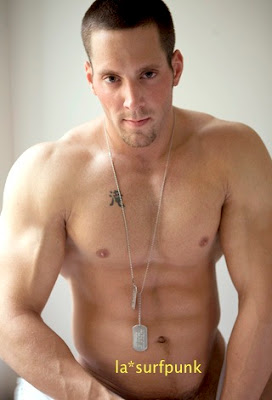 We at PAPER were incredibly saddened to learn of the death of our friend, adult-film star Erik Rhodes, who apparently died in his sleep last night. The 30-year-old Long Island-native was a truly hilarious and larger-than-life character as well-known for his wicked sense of humor as he was for his enormous muscles. Rhodes was a legend in the gay adult film world. His fame transcended porn and he did mainstream modeling (famously appearing in an ad for Loehman's department store) and sat front row at the Marc Jacobs fashion show. He was a regular in the pages of PAPER magazine and on PAPERMAG.com, and we'll cherish his hilarious stories that didn't make it to print -- including the one of him losing his virginity at a Mexican restaurant in a strip mall and being served a burrito lunch on the set of his adult film debut. He was a true New York character and we'll miss him like crazy.

Falcon Studios reports via their blog:

It is with great sadness that San Francisco-based Falcon Studios and Raging Stallion Studios has confirmed the passing of Porn Superstar, Erik Rhodes. Erik died of a heart attack in his sleep this morning at 5:30 AM EDT. Rhodes had been a Falcon Exclusive for all but one scene in his entire career, and he rose quickly to Mega-Star status after his first DVD Super Soaked was released in 2004.
Chris Ward, Falcon/Raging Stallion Studios President offered the following statement: “We are deeply saddened by Erik’s passing. He was a part of our family and we are devastated. Our thoughts are with his loved ones.”
Posted by LASURFPUNK at 10:23 AM