AN END OF AN ERA 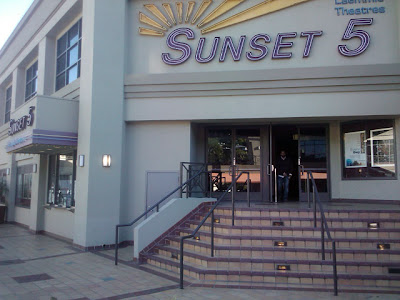 Wahhhhhhh.
The Laemmle Sunset 5 Theatres is going to the great movie house in the sky.
We always made it a point to see some type of queer cinema over Pride weekend at that specific West Hollywood location. Then, a workout at Crunch. Our tradition!! Billy's Hollywood Screen Kiss; Edge of 17; Trick; Chuck and Buck; Kiss Me Guido
All those films enjoyed with hot buttery popcorn, a refreshing soda and sometimes a hanky to wipe away the tears.
Say goodbye to all that shit.....
Robert Redford’s Sundance Cinemas will take over the Sunset 5 complex in West Hollywood after Laemmle Theatres was unable to come to terms with the landlord on a new lease. The theater will close at the end of November, the LA Times reported, and will reopen in late spring after undergoing renovations. The venue had been a staple of indie and art movies for 20 years, but the glossy lure of Pacific’s Grove, Arclight Hollywood and the Landmark in West L.A. increasingly siphoned specialized fare away from the Sunset 5. Laemmle president Greg Laemmle conceded “we started seeing fewer and fewer” indie and arty hits because “distributors were under pressure to get into the Arclight.”
Posted by LASURFPUNK at 8:17 AM