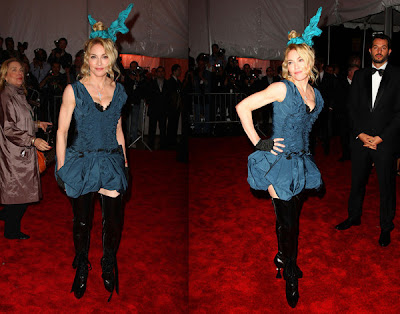 A Brooklyn resident tells THE MUSIC MIRACLE to fuck off!!
Can we buy this man a drink???
I yelled at Madonna today, and I didn't even realize it until later!
She's apparently directing a film (!) and was shooting right in front of my house in Brooklyn on Wednesday. I came outside to do my morning walk and there were crowds of people all over the place: screaming black girls, curious Chassidim, hipsters in Ray-Bans feigning disinterest, irritated cops… I saw a bunch of Arri equipment boxes and realized it was a film shoot of some sort. I walked a few feet down my block and a chick with a headset held up her arm and said "You have to cross the street, sir!" I replied: "I don't have to do anything. This is my neighborhood, and a public sidewalk, and I'll go where I please!"
I walked a few more feet and another drone with a headset came rushing up to me and said "The sidewalk's closed. Please cross the street!" I replied: "This is a public sidewalk. I will continue to walk where I please."
I pushed past him and a I came upon a haggard woman in sunglasses, a baseball cap and a scarf printed with a stylized skull pattern holding a clipboard and looking into a hand-held monitor along with a couple of other people. Being a veteran of the terrible world of film production, I recognized that this woman was probably the director. I paused as I passed and said to her: "You need to inform your brain-dead P.A.s that they need to treat us residents a little better, honey." She looked at me, expressionless behind her sunglasses for a moment before one of the men with her said "Move along, sir." I replied "a hearty fuck you to both of you" and I walked onward.
Later, when I was on my way home, I stopped in the local market and the Korean guy who runs the place said to me: "what do you think of that mess out there?" I told him of my encounter with the production assistants and the director. He laughed and said: "do you know who that director is? Madonna!"
I smiled and said "No, I didn't recognize her.. but she looks like hell and sure runs a shitty location shoot."

via queerty, via althouse
Posted by LA*SURFPUNK at 9:53 AM