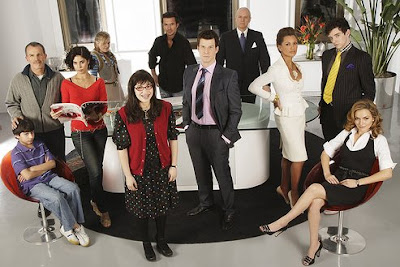 It's your fault ABC.
Pay for trash, so expect it and shut the fuck up.
Hire quality guest actors you dumb fucks.  Jane Fonda could have told you this!!
It got so ugly on the set of Ugly Betty between Lindsay Lohan and the popular ABC show's star, America Ferrera, that Lohan was cut from an agreed-upon six episodes to four.
One production source said, "It was a mess. Lindsay would show up every day with an entourage of people. She smoked 24/7, and after she left, they had to repaint her dressing room it was such a mess."
In addition, Lohan "would obsessively cut pictures of herself out of the tabloids like she was creating some sort of scrapbook and refused to go on set until America was there - it was a power play."
The show is even editing more scenes from what was shot already.
Here's an idea ABC:
Just write the money off as a "loss" and don't show the scenes at all.
Create a new story line with a different character and RESHOOT!
That will show these hacktors, and future ones, that if they pull this shit--you will get CUT, bitch!!!!
If you enjoyed this post, other posts and enjoy reading LA*SURFPUNK HOLLYWOOD--Please take a moment to make a donation to keep this blog alive!!! You can click the donate button at the top right of the page. We thank you!!