DON'T EGG ME ON 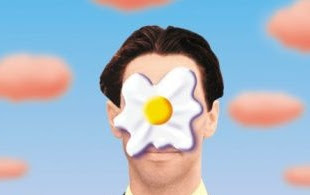 Australian footballer Jason Akermanis penned that riCOCKulous newspaper article telling   gay footballers to stay in the closet.
This week somebody egged his car and his home:
Jason Akermanis, who suggested in his column that the world of Australian football wasn't ready for openly gay men, said it was terrifying to have missiles thrown in the darkness at his house and car, the Herald Sun reported. "I'm not happy and I didn't get a wink of sleep after it happened," Akermanis said. "It was pretty terrifying, to be honest, to hear all that noise coming because it's such a quiet neighbourhood we live in." It's the second time in a month the Western Bulldogs footballer has been egged. Akermanis, whose comments in the Herald Sun on homosexual footballers sparked a controversy last week, said about 20 eggs had been thrown. He said his comments could have provoked the latest attack, but he was not sure.
Posted by LA*SURFPUNK at 6:37 AM