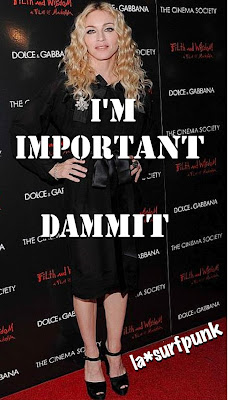 We posted earlier  on what Madonna had to say about the 14- year prison sentence imposed on the gay couple in Malawi.
The Music Miracle, one to never settle, started a crusade and became very vocal about the injustice.  She summoned her fans to back her.
NOW!  The president of Malawi conceded.  The two, Tiwonge Chimbalanga and Steven Monjenza,  were released from prison on "humanitarian" concerns.
The Ray of Light penned this on her blog:
I have always believed love conquers all—yesterday I got to see it in action. In the last week over 30,000 of you added your name to mine calling for the release of Steven Monjeza and Tiwonge Chimbalangal—the Malawi couple sentenced to 14 years hard labor for the "crime" of homosexuality. With incredible joy, I am writing to share with you that Malawi President Bingu wa Mutharika has ordered their release."

Mamma M can NOT only move mountains and earth and  pour tons of monies to build schools and communities in Africa, she can make prison terms disappear too!!
The power of M.
Posted by LA*SURFPUNK at 9:34 AM