LOVE ME OR HATE ME 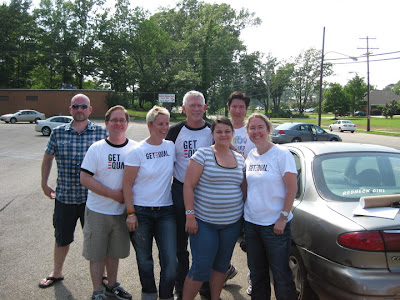 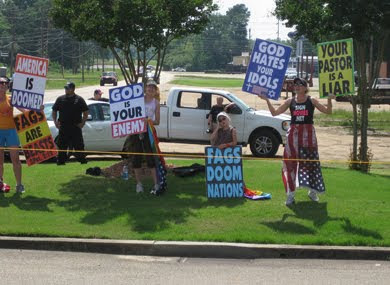 Various groups surfaced at Constance McMillen's graduation to oppose/support the teen.
That megalomaniac  idiotic Westboro Church surfaced with hate-written signs.
GetEqual sent a group to counter-protest and support the lass.
The Advocate reports As part of Harvey Milk Day on Saturday, Get Equal traveled to the South with its Mississippi Dignity Caravan, whose activities began with a rally at the Mississippi state capitol in Jackson. The group then traveled to Fulton, the home of Itawamba High School. McMillen attended IHS before harassment, following her attempt to bring a same-sex date to her prom, forced her to transfer to a school in Jackson.

Six members of the Kansas-based Westboro Church, mostly members of the Phelps clan, protested the Saturday graduation of IHS with their typical homophobic Sturm und Drang.

“We outnumbered them 60 to 6,” Get Equal reported on its Facebook page. “Two active members of the military even showed up in their uniforms to show their support of the counter-protest. Both said they weren't gay, but wouldn't have a problem if a fellow soldier was.”

Get Equal members then met up with McMillen, who was two blocks from the protest.
Posted by LA*SURFPUNK at 6:49 AM