AROUND AND AROUND AGAIN 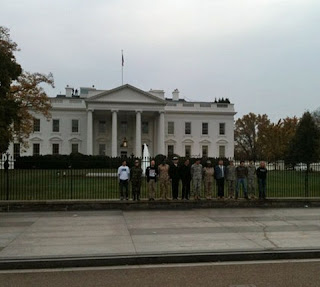 Here we go for another round.
Thirteen repeal DADT activists have chained themselves to The White House fence, AGAIN.
Once more, Lt. Dan Choi was one of the chain gang.
This was the groups attempt to call out President Obama and U.S. Senate Majority Leader Harry Reid to keep their promises of securing a repeal of the gay military ban Don't Ask, Don't Tell during the lame-duck session of Congress, which starts today.
Via GetEQUAL's presser:
The 13 veterans and repeal advocates arrested today include:

>>Five veterans (Lt. Dan Choi, Petty Officer Autumn Sandeen, Cpl. Evelyn Thomas, and Cadet Mara Boyd) who were arrested back in March during the GetEQUAL organized “Don’t Ask, Don’t Tell” act of civil disobedience at the White House fence demanding President Obama show leadership on repeal.
>>Robin McGehee, co-founder and director of GetEQUAL, and Dan Fotou, action strategist for GetEQUAL.
>>Former U.S. Army Staff Sergeant Miriam Ben-Shalom, who was discharged in 1976 for declaring and admitting she was a lesbian. She became the first-ever LGBT servicemember reinstated to her position in the U.S. Military, by a U.S. Federal District Court. On July 30th, 1993, Miriam and 26 other protesters were arrested at the White House fence for protesting then-President Bill Clinton’s broken promise to repeal the gay ban – instead signing the “Don’t Ask, Don’t Tell” bill into law.
>>Former U.S. Marine Corps Sergeant Justin Elzie who, in 1993, became the first Marine ever investigated and discharged under the “Don’t Ask, Don’t Tell” law. Elzie was also the first soldier to be discharged under "Don't Ask, Don't Tell" to fight his discharge and win – resulting in his service as a Marine for four years as an openly gay man.
>>Former U.S. Army Arabic Linguist Ian Finkenbinder, who was discharged from the Army in December 2004 after announcing to his superiors that he was gay. Finkenbinder is an Iraq war veteran and was about to return for a second tour of duty when he was discharged.
>>U.S. Army Veteran and Repeal Advocate Rob Smith, who was deployed to both Iraq and Kuwait before being honorably discharged after deciding not to re-enlist in the U.S. Army due to the added pressure of living under the “Don’t Ask, Don’t Tell” law.
>>Father Geoff Farrow, a Catholic priest who spoke out against the church’s official stance in support of California’s Proposition 8, removing the rights of same-sex couples to marry. Because of his courageous stance against Prop 8, Father Geoff Farrow was removed as pastor of St. Paul’s by his bishop and suspended as a priest.
>>Scott Wooledge, a New York-based LGBT civil rights advocate and blogger who has written extensively on the movement to repeal “Don’t Ask, Don’t Tell” at Daily Kos and Pam's House Blend.
>>Michael Bedwell, long-time LGBT civil rights advocate, close friend of Leonard Matlovich, and administrator of the site www.leonardmatlovich.com.

When you hear talk about gay icons.  These 13 names.... these are GAY ICONS.
They are fighting for your, theirs and all our rights to make this country a better place for all gay tax-paying citizens.
We are not second-class citizens!  Dammit.
Oh, wait....
But you are Blanche, you are a second class citizen:
Especially if  you are in the military.   You live outside Connecticut,  District of Columbia, Iowa, Massachusetts, New Hampshire or Vermont.
A GAY ICON DOES NOT MAKE:
Not some singer that came out after he made millions.  To date: He has done nothing for the gay rights movement.
Not some homophobic RepubliCUNT Congressman from Illinois that The New York Times mistakenly labeled as one.  To date:  He has done nothing to propel the gay rights  movement.
Not some hick from Wasilla that took his clothes off for Playgirl.  And,  still fucks cunt.  To date: He  has done nothing to help move the gay rights movement forward.