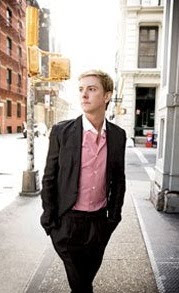 The straight (ICK!) Facebook co-founders, Mark Zuckerberg and Sean Parker, have had their media limelight and even a fucking movie (The Social Network).

And nobody has bothered to mention the other Facebook co-founder Chris Hughes.  THE cute one!!!  The GAY one!!!

The idea is to take the principles that helped Mr. Hughes organize a network of volunteers into a successful political force and apply them to a much broader universe of causes and issues.

Mr. Hughes is not the first entrepreneur to venture into this territory. Causes, a Facebook application, and the Web site Global Giving are among the many existing ways to find and support charities online.

But Mr. Hughes said Jumo would not be primarily about soliciting donations. Instead, he said, the site would first try to deepen ties between its users and their favorite causes.

“The more connected that individual is to an issue they care about, the higher probability there is they will stay involved over a longer period of time,” Mr. Hughes said.

To start, the Jumo site was seeded with more than 3,000 issues and groups. But “anyone with a social mission can create a page,” said Mr. Hughes, who thinks Jumo could become a simple way for smaller charities to establish a social media presence.

We've posted on Chris Hughes before.

Posted by LASURFPUNK at 6:56 AM