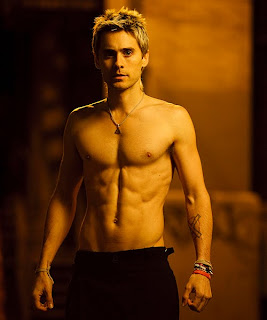 30 Seconds to Mars has a new video, Hurricane.
Before the video can air on a station like MTV, the censors have listed all kinds of problems with the content of the video song.
Leto is taking a page out of Madonna's book, this kind of controversy makes the consumer audience want to see it even more and builds a buzz.
Here's some correspondence sent to Team Leto about the video and what would need to be edited:
Hi ——,

Here is the feedback from our compliance team,

Please note the final comments can only be given after our compliance team has viewed the digibeta, there were areas which they were unable to view towards the end of the video.

Overall the bondage theme will warrant a POST 10 PM restriction as the film is in its current form.

09:17 – WOMAN RUNS FINGER OVER OTHER WOMAN’S G-STRING CLAD BOTTOM AND TOUCHES HER ANUS -

There are other bondage shots towards the end of the film that compliance were unclear about, they would have to view frame by frame on tape to gauge whether they would need to be cut too for POST 10PM.

The violence in the film is not graphic and would warrant a POST 7pm restriction. But the overall sexual content does push the restriction up.