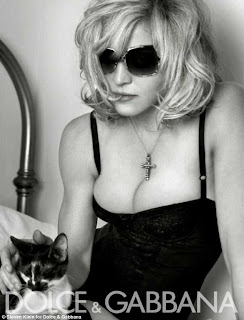 If Grace Coddington doesn't know who you are.... there must be something TO THAT!!!
This dullard,  this simpleton  **checks notes**   a Piers Morgan keeps carping to anyone that will listen that he is not, will not, absolutely not have our Madgesty on his CNN talker.
Morgan hisses to Billy Bush:

Madonna and I, we’ve never really seen eye-to-eye. There was a bread roll throwing incident in London in the mid ‘90s; there was an incident at a hotel in the south of France [at] the Cannes Film Festival involving a photographer and a bodyguard; there’s been an incident involving a pub owned by her recently departed husband, Guy Ritchie, where my brother was the manager…You know the worst thing Madonna did to me? Madonna’s publicist once said to me, ‘Listen to me, Madonna is not pregnant,’ when I was running a newspaper. And I said, ‘Are you sure?’ She said, ‘Listen to me, Piers. Madonna is not pregnant.’ The next day, they announced [the news] on a rival newspaper’s website. There’s a series of crimes.”
Like THE MUSIC MIRACLE would want to do your crappy, cheap talk show!!
AGAIN-- you are?????????
Posted by LASURFPUNK at 2:26 PM