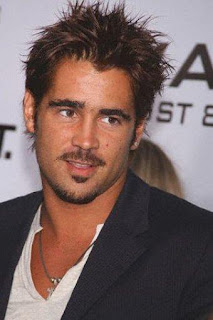 Like honey on freshly baked biscuits, that's our love for Colin Farrell.
And, we are totally all about this Total Recall 2.0 reboot which Farrell will star in.
Producer Neal Mortiz confesses:
"I think the world that Len Wiseman is creating is incredible. It's a real world, a real future world, where the cities have just gotten so overcrowded that the cities are just built up, up, up, up. It's just everything I see on the movie, every pre-vis I see on the movie, every conceptual drawing on this movie that I see just makes me more and more excited. We're playing it like a real world, but there's all these technological advancements to the real world, and it's just really, it's cool. It's an awesome movie. I'm dying-as a fan of movies, more than anything, it's a movie that I'm just dying to see."

.....instead of it being a spaceship that takes us to another planet, there’s something that takes us from one side of the planet to another that’s really interesting.”
Kewl!   Are we talking about bending space and traveling in a vortex??
AND, we want LOTS of Colin naked....... with tons of ass shots in said film!!!
Posted by LASURFPUNK at 1:28 PM