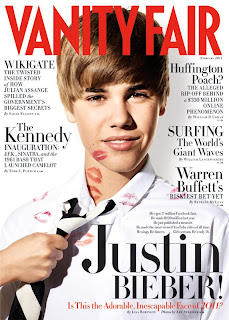 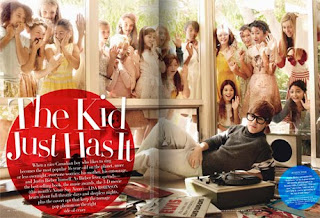 Justin Bieber covers February's Vanity Fair.
“Music is music, and I’m definitely influenced by Michael Jackson and Boyz II Men and people who were black artists—that’s what I like. But I like their voices and I like how they entertain—it’s not about what color they are,” confesses the teen to VF's Lisa Robinson.

Oh,  and a month can't go by without something on the Kennedy clan in Vanity Fair, natch.
Notice one of the headlines:  The Kennedy Inauguration.

Because Vanity Fair can't process anything that has happened after the Kennedy administration, the mag paints Justin Bieber as Eddie Fisher.....

....The whole things smacks of a bygone era of sock hops and Coke in glass bottles. The only thing that's missing is a varsity sweater with a huge letter on it. My favorite thing about the shoot are the 20 Bieber-obsessed tween girls they dolled up in poodle skirts and sweater sets to chase him around.

Touche!!
Posted by LASURFPUNK at 8:54 AM