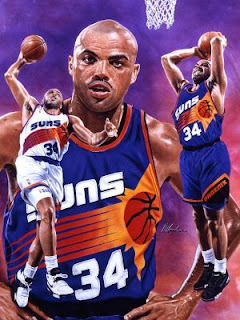 "His daughter said something that was very interesting.......You know, people try to make it about black and white. He talked about equality for every man, every woman. We have a thing going on now — people discriminating against homosexuality in this country. I love the homosexuality people. God bless the gay people. They are great people," in remembrance for Martin Luther King, Charles Barkley slams Bernice King and homophobia.
WORK!
For the record: Barkley first came out in favor of gay rights in August 2006 and said, "I'm a big advocate of gay marriage. If they want to get married, God bless them." In February 2008, Barkley slammed evangelicals and Republicans as "hypocrites" and "fake Christians" for opposing marriage equality.

We've always liked Barkley, especially making us laugh on those sports talk shows.
After this comment, we LOVE him!!
Posted by LASURFPUNK at 6:04 PM