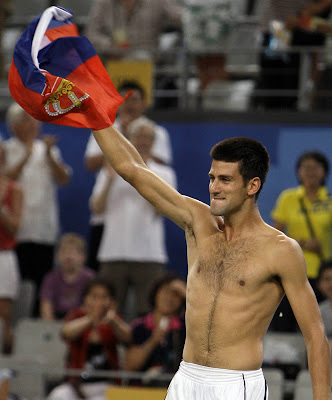 Our Sexy Serbian took to his blog to talk lightly about the US Open.
Here's what our sumptuous stud penned:
People around me always remind me to write diaries for the site. I know, I have to do something about this bad habit of mine -> not writing it more often. I’m working on it! ;)

I haven’t been writing for a long time, so it’s hard to decide where to start from.

You probably already know how I played, behaved, with who and when I play, so I’m gonna talk about different topics.

Toronto tournament was really well organised, they treated me like a champion, and I want to thank the tournament director and others from organisation team for that.

Many Serbs that live in Canada were in the stands, just like last year in Montreal, so I felt like I was playing at home!
I could have done better on court, but life went on, so did preparations for Cincinnati!

The tournament takes place in Mason (Cincinnati suburb). To be honest, it’s not the most interesting place in the world. Besides tennis courts that are burning from the extremely hot weather, there is amusement park with crazy roller coasters, cinema, few restaurants next to our hotel ‘Marriott’ and several beautiful golf courts for relaxation. I’m sorry if I insulted anyone, but those are the facts. Good thing is that you have a car during the tournament, and if you want you can always go to New York! :)


Here's what our future husband pontificated on the Beijing Olympics 2008:

That’s the subject we could write and talk about, dream about for our whole life. I was privileged to take part in the most important, the most prestigious sports event… You get emotionally fulfilled already at the thought of the history of the event. When I was going to Beijing, I didn’t know what to expect, cause I’ve never been a part of the Olympics. There’s also a certain difference in organisation, the tennis Olympic tournament is part of ITF, and most of the tournaments we play during season are ATP!

We could see that everything was in service of the Olympics, at the airport, in the city, and ofcourse in the Olympic village. Acreditation was one of the most important things you had to take care of. Without it you couldn’t go anywhere, not even enter China (it was like a visa!). It is risky for those who lose their things, because the procedure of getting the new one could take very long. There were around 15.000 people in the village, so it was very hard to organise everything. But my opinion is that the organisation was perfect!

There were numerous blocks of flats, I’m not sure on what basis we were placed… We shared our block with Macedonia and Angola, across our block, there were Slovenians and Bosnians, Croatians were a bit more far. There was a long street along the village, with busses ready to take you to any part of it. It was not hard to go through the village on foot, because everything was relatively near. The most visited place there was canteen. There was always a huge number of sportsmen all day long, enjoying the variety of meals offered… from Mediteranian food, Asian… to McDonald’s! :)

I’m sorry we weren’t more successful in winning medals. I think we had enough quality to hope for some more medals for Serbia. Anyhow, the next Olympic Games may be more successful, but only if the state and the Olympic Committee take it seriously, realise the potential of our sportsmen, and give them support. It all depends on organisation, on intercession of some institutions, and ofcourse on the sportsmen.

The feeling when you enter the stadium during the opening ceremony is irreplaceable. The Olympics are the dream of every sportsman!

The weather was unusual. During first few days, we couldn’t see the SKY! Yes, you read it well. Because of all the smog and gases the only colour we could see was GREY! One day the humidity was 87%! It tells you how hard it was to compete in those conditions… forget about the weather and other stuff, I’m taking only the most beautiful memories from Beijing. I didn’t have time for sightseeing, but to be honest I wasn’t even thinking about it, during those ten days I spent there, I wanted only to achieve the best possible result, and to experience charms of the Olympics and the Olympic village.

The Monday came, and we left for New York…

It was difficult for me to leave the place, the experience I will gladly remember throughout my whole life. What I regret most is that I missed going to follow other sports. I wanted to watch athletics and swimming, because I associate those two sports with the word Olympics. Unfortunately, I had no time for that.

I will try to be healthy and successful four years from now, so I could book quota to take part once again in the Olympics. It’s still early to say, but my wish is that also my younger brother Marko takes part in London 2012! :) Maybe Djordje too (if he makes huge progress) :) Ha, ha, ha!

In the next diary I will write you about my stay in New York!