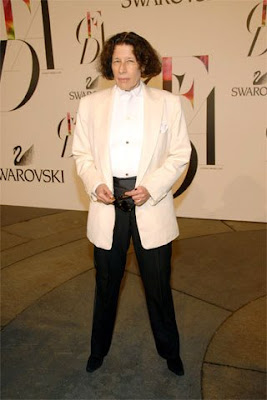 THE RECESSION: Barry Diller and Fran Lebowitz Aren't Worried | So what does Barry Diller have to say about the meltdown on Wall Street? "I think it's great, I think it should happen every day," he told a reporter from the Observer at a party for Graydon Carter's new book on Monday night, before adding that he was just joking. Fran Lebowitz's take: "Just when you think how horrible New York has become in terms of things interfering with the tone of the city, they're finally leaving!" she said. Who is "they" exactly? "The rich people! They're leaving!" Careful, Fran. If all the rich people leave town, you'll have no one to pick up your tab at the Waverly Inn every night. [NYO]


OVERHEARD:♦ In his new book, Alec Baldwin goes off on TMZ's Harvey Levin, and says that the fallout from his infamously leaked voicemail made him want to commit suicide. [R&M]
♦ Barbra Streisand sang four songs at an Obama fundraiser last night. Attendees included Leonardo DiCaprio, Steven Spielberg, Jeffrey Katzenberg and David Geffen. [Fox News]
♦ Anne Hathaway acted like a bit of a diva at an event in Toronto. She also smokes, which her publicist doesn't want you to know. [OK!, R&M]
♦ Sarah Palin's "secretive circle of stylists" dressed her in a $2,500 Valentino jacket for her big speech at the Republican convention. [P6]
♦ Bad news: Hugh Hefner says all three of the Girls Next Door are getting spinoffs. [E!]
♦ Even worse news: Heidi Montag and her sister Holly are "developing a top-secret project" together. [LAT]
♦ Scarlett Johansson is on her way home from a trip to Rwanda. [People]
♦ Derek Jeter was spotted "caressing" the face of a "ravishing, dark-haired beauty" at the Four Seasons yesterday. [P6]
♦ Marc Anthony says he was completely surprised by the birthday party Jennifer Lopez threw for him on Sunday, which means he clearly doesn't read the tabloids, which reported about the event days before. [People]
♦ One of Sienna Miller's biggest fan sites has shut down because its webmaster says she's lost all respect for the star. [P6]
♦ Howard Stern's daughter Emily is starring in a new rock musical. [P6]
♦ Rumer Willis will guest star on CSI: New York. Just what you've been waiting for. [ET]
♦ Jamie Foxx "couldn't stop rubbing" Stacy Keibler at a party in Las Vegas this weekend. As for Stacy, she hooked up with Kevin Connolly the night before. [R&M, P6]
♦ Nicole Richie and Joel Madden might be close to splitting up. [Star]
♦ Robbie Williams and his girlfriend, Adya Field, have split. You're crushed, we know. [Mirror]
♦ Is Jennifer Aniston dating Gerard Butler? [Extra]
♦ There are doubts that Britney Spears is going to be able to finish recording her new album in time for its December 2nd release date. [MSNBC]
♦ Victoria's Secret has named Marissa Miller its newest Angel. [People]
♦ An upcoming documentary claims Fidel Castro has slept with 35,000 women. [P6]