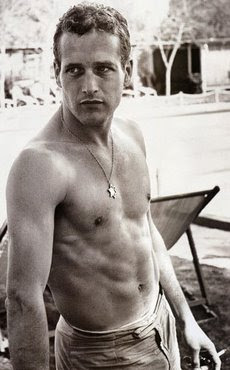 May your star always shine bright in our hearts forever.
Paul Newman was 83, he was confronting cancer.
A tiny little bio of Mr. Newman:
Newman attained stardom in the 1950s and never lost the movie-star aura, appearing in such classic films as "Cat on a Hot Tin Roof," "Exodus," "The Hustler," "Cool Hand Luke," "Butch Cassidy and the Sundance Kid," "The Sting" and "The Verdict."
He finally won an Oscar in 1986 — on his eighth try — for "The Color of Money," a sequel to "The Hustler." He later received two more Oscar nominations. Among his other awards was the Motion Picture Academy's Jean Hersholt Humanitarian Award.
…
He stumped for liberal causes, including Eugene McCarthy's 1968 presidential candidacy, and earned a spot on Richard Nixon's enemies list — "the highest single honor I've ever received," he said.
In 1982, Newman and his friend A.E. Hotchner founded Newman's Own, a food company that produced food ranging from pasta sauces to salad dressing to chocolate chip cookies.
"The embarrassing thing is that the salad dressing is outgrossing my films," Newman once wryly noted.
To date, the company — which donates all profits to charities such as Newman's Hole in the Wall Gang camps — has given away more than $200 million. Newman established the camp to benefit gravely ill children
If you enjoyed this post, other posts and enjoy reading LA*SURFPUNK HOLLYWOOD--Please take a moment to make a donation to keep this blog alive!!! You can click the donate button at the top right of the page. We thank you!!