The more images we see of this British bloke, the more we likey.
Andrew Garfield is beautiful--that mop of luscious hair and those puppy dog brown eyes.
He's featured in Vanity Fair (October) and Italian Vanity Fair.
Gorge! 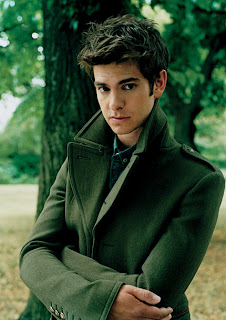 Via Vanity Fair:
AGE: 27. PROVENANCE: Los Angeles and Surrey, England. ELITE WEB: Before he snatched the lead in the next Spider-Man—set for release in 2012—Garfield worked with a string of big-name directors: Robert Redford (Lions for Lambs), Terry Gilliam (The Imaginarium of Doctor Parnassus), and Spike Jonze (I’m Here). This month he stars in Mark Romanek’s Never Let Me Go, with Carey Mulligan and Keira Knightley. (See review, page 140.) “With all these incredible artists, I feel very, very lucky,” Garfield says. “I try not to analyze it too much. If I did I would probably deteriorate and implode because it is so baffling.” FROM HUMILITY TO HARVARD: Also arriving this month is David Fincher’s The Social Network, about the early days of Facebook. Garfield plays Eduardo Saverin, Facebook C.E.O. Mark Zuckerberg’s undergraduate best friend and confidant. REQUIRING AN ACCENT FROM ... ? “Eduardo was born in Brazil, lived in Miami, and goes to university in Boston—I worked very hard,” Garfield says. “My father’s American, so I’ve had his accent in my ear my whole life. And the more time I spend in the States, the more my English friends take the piss out of me.” 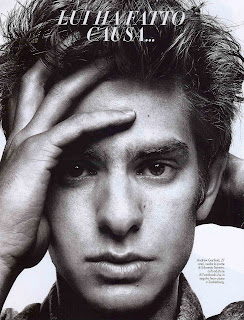