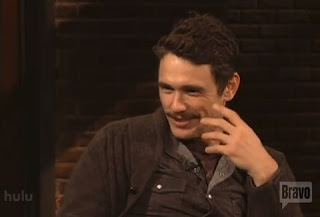 Jamie Cakes describes to James Lipton the research for his role as a hustler in the film, Sonny.
Franco shadowed a real hustler in the back of a strip club and with a client.
The thespian touted on Inside the Actors Studio:
"I found this guy that was kind of a perfect model......He claimed to service both males and females. He took me on one of his jobs......  The guy said, 'Oh, you wanna play a prostitute? You want some real research? Then come with us.....It went down. Everything went down, as you see in the movies and hear about. The eerie thing is, it was like a movie, but it wasn't a movie -- it was the real thing, happening in front of me."
Posted by LASURFPUNK at 4:23 PM