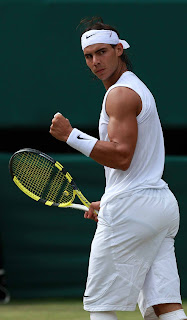 Rafa Cakes has inked a deal to be the next Emporio Armani manty model.  His modeling work will be for the underwear and jeans line for S/S 2011.
He follows in the footsteps of gorgeous sportsmen David Beckham and Cristiano Ronaldo.
Look for the campaign/media onslaught to roll out starting in February 2011.
Posted by LA*SURFPUNK at 10:24 AM