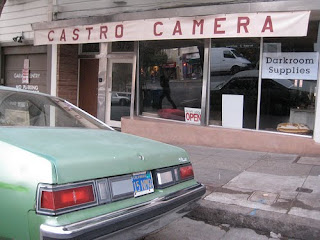 Most gays hate Gay Inc.  They feel these groups are really all about high salaries and sit-down  plate dinner functions than fighting hard and tackling for our equal rights.  The Human Rights Campaign is one of those groups.
So how do you like this news?
HRC plans to move their gift shop into Harvey Milk's old space, Castro Camera's.  GASP. SHOCK.  HORROR.
We feel a little better it is in the hands of gays than of straights or an insensitive retail corporation.

In a press release, the organization is painting the move as a marriage of two greats in the gay civil rights fight: "We are the beneficiaries of [Milk's] groundbreaking activism and are honored to be part of the future he envisioned," said HRC president Joe Solomonese. But some gay advocates say that's a bit of a lofty declaration. Let's remember that Milk was actually effective in rousing San Francisco's gay civil rights movement in the 1970s. As for the HRC, many accuse the country's biggest gay civil rights organization of complacency. "I can definitely tell you the grassroots community is very frustrated and feels it's an insult for the HRC to be in that space," says Robin McGehee, the director of GetEQUAL, a gay rights org that stages direct protests. "I hope by being that space every day they're reminded by the direct actions and protests that Harvey Milk and Cleve Jones spurred out of that spot and never compromise equality."
Posted by LASURFPUNK at 8:01 AM