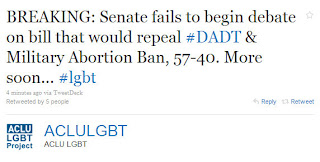 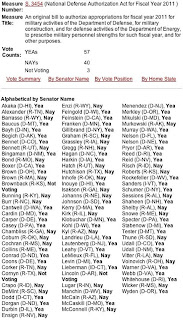 We won't be holding our breath!!  Sigh.  Smirk.
**************************************************************
President Obama opines:
A minority of Senators were willing to block this important legislation largely because they oppose the repeal of 'Don't Ask, Don't Tell.' As Commander in Chief, I have pledged to repeal this discriminatory law, a step supported by the Secretary of Defense and the Chairman of the Joint Chiefs of Staff, and informed by a comprehensive study that shows overwhelming majorities of our armed forces are prepared to serve with Americans who are openly gay or lesbian. A great majority of the American people agree. This law weakens our national security, diminishes our military readiness, and violates fundamental American principles of fairness, integrity and equality.

GetEQUAL
I have to be honest -- I just vomited a little in my mouth. The Senate just voted on whether to bring the National Defense Authorization Act (NDAA) up for conversation. Not for passage -- just for conversation. It failed. We all laid everything we could on the line for this bill -- a piece of legislation that would have repealed "Don't Ask, Don't Tell." We all know that gay and lesbian Americans are just as patriotic and capable as straight Americans -- but dysfunctional Senate processes, a homophobic Republican Party, and a spineless Democratic Party got in the way of equality once again.

OutServe
Today’s vote is heartbreaking and demoralizing to all members of OutServe - and the tens of thousands of gay, lesbian, and bisexual service members - who must continue to serve in silence and live a lie. No words can describe how it felt to watch our U.S. senators uphold discrimination and perpetuate the deceit and compromised integrity that consistently result under "Don't Ask, Don't Tell." We had more faith in our elected officials to heed the advice of military leadership and vote against prejudice. Instead, a minority of senators have successfully blockaded the entire defense spending bill on the basis of prejudice and politics.
Servicemembers United
"This was a major failure on the part of the Senate to simply do its job and pass an annual defense authorization bill. Politics prevailed over responsibility today, and now more than one million American servicemembers, including tens of thousands of gay and lesbian troops, are worse off as a result," said Alexander Nicholson, Executive Director of Servicemembers United and a former U.S. Army interrogator who was discharged under "Don't Ask, Don't Tell." "Since the votes are there in isolation, the Senate should still consider a stand-alone bill to repeal the 'Don't Ask, Don't Tell' law before adjourning for the winter holidays."
National Gay & Lesbian Task Force
The Senate’s failure to allow a vote on ‘Don’t Ask, Don’t Tell’ repeal is a huge disgrace and disservice to our country. Senators had an opportunity — and an obligation — to move toward ending an outdated, unnecessary and costly policy that discriminates against courageous and qualified people willing to risk their lives by serving in the military. How many more personal and painful stories of discrimination must these lawmakers hear before they act to end this harmful policy? How many more exhaustive Pentagon studies need to be done that affirm it's time to end the ban? Three-quarters of Americans say ‘Don’t Ask, Don’t Tell’ should be repealed, as do top military leaders. People from every background, every faith, every community across the country know that qualified, patriotic Americans willing to risk their lives by serving in the military should be able to do so, free of discrimination.

Posted by LASURFPUNK at 2:53 PM