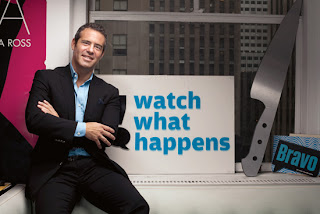 Good news for next week.
We get to see Andy Cohen sit spread on his club house chair for 5 nights, Sunday  to Thursday, Dec. 16th.  All that MAN MOUND.  We'll be the CATCHER to his PITCHER!!
Bravo wants to see  how well Watch What Happens Live numbers (ratings) will do.
Cohen can't take on a full 5-night a week talk show workload with his current duties, BUT  he could bring in a second co-host if the opportunity arises
Also in the works is a New Year's Eve special, Variety details:
As for the two-hour New Year's Eve special, Cohen will host live from his "Watch What Happens" set starting at 10:30 p.m. ET. Guests will include comedienne Sandra Bernhard, Meghan McCain, singer-songwriter Jay Sean and several Bravo stars.

"We just decided to do this a couple of weeks ago," he said. "To me, the last place in the universe I would want to be on New Year's Eve is in Times Square. I want to be with my friends at a party. There is a lot of fun to be had on TV."
via variety
Posted by LASURFPUNK at 2:56 PM