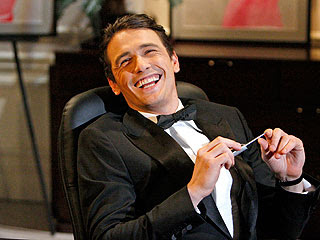 Jamie Cakes has submerged himself in this time consuming doozy of a project.
Franco teams up with OUT and critically-acclaimed director Gus Van Sant.  The collaboration, Unfinished, is a 12-hour film hallmarking My Own Private Idaho; Franco has renamed it Endless Idaho.  The exhibit will showcase behind the scene  and deleted footage; location scouting/planning for the 1991 film; interviews with male street walkers; footage of Keanu Reeves and River Phoenix improvising--that may be worth the time right there.
Also included in the 12 hours is a second film, My Own Private River, with nothing but footage/photos of River Phoenix set to a score by Michael Stipe (REM).  That could be cool?!
AND!.... eight works on paper by the director Van Sant.  Hmmm.
Is this something you would see at the Gagosian Gallery in Beverly Hills, February 26 to April 9??
Posted by LASURFPUNK at 9:17 AM