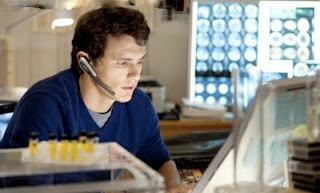 We posted some time ago that Jamie Cakes would be part of the Planet of the Apes prequel, Rise of the Apes!
Jamie plays a scientist.
The film centers how the apes take control and mankind becomes the second class citizens.
The scientist is trying to cure Alzheimer and a super-intelligent ape is created.  Kewl!
Look for the film later in the year, F/W 2011.

Posted by LASURFPUNK at 4:37 PM