Over the weekend, we posted that ANONYMOUS gave those ignorant fucks at Westboro an ultimatum.
ANONYMOUS is claiming they didn't make the threat....yet.
ANONYMOUS retorted with a press release.
The group writes:

So we've been hearing a lot about some letter that we supposedly sent you this morning. Problem is, we're a bit groggy and don't remember sending it. Our best guess is that you heard about us on that newfangled TV of yours and thought we might be some good money for your little church.

This is not so foreign to us; as you may have heard, we trade in Lulz. You just do not have enough to offer right now.

While Anonymous thanks you for your interest, and would certainly like to take a break and have some fun with you guys, we have more pressing matters to deal with at the moment.
But, we will keep this application on file, and will certainly contact you if any openings become available in future.

Next time, don't call us. We'll call you.

Additionally, as your "Press Release" failed to understand: When Anonymous says we support free speech, we mean it. We count Beatrice Hall among our Anonymous forebears: "I disapprove of what you say, but I will defend to the death your right to say it."

Do some among our number hate you and your cynical exploitation of your human rights for monetary gain? Of course. But the MoralFags are also the first to admit that they are, in fact, your rights to exploit.

In closing, let us assure you: We are not BAWWWING sissies, nor are we afraid of your false god; we're just really busy. Stay tuned, and we'll come back to play another day.
We promise.

To the Media: Just because it was posted on AnonNews doesn't mean every single Anon is in
agreement, in fact in this case it doesn't even mean a single Anon is in agreement. Next time, if you could give us a few minutes to put all our paperwork in order, we'll be sure to let you know what we're up to. (LOL)

To Anonymous: It's a trap. They've got their ports wide open to harvest IPs to sue. Don't DDoS, and boycott Operation Westboro. If you really want to continue messing with them, just send them a few male prostitutes and faxes of goatse. Nothing more.

(Note: This letter was written by more than 20 Anons, at the same time, and none of them were inbred family members. Unlike that other, shitty "Press Release".)

Over the weekend, what we all thought was the "real" ANONYMOUS threat letter, that dumbass church did put out this press release afterward: 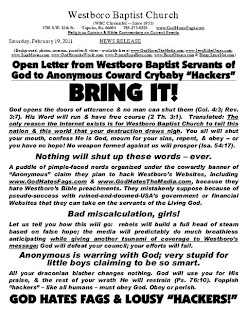 Posted by LASURFPUNK at 9:52 AM