It Gets Better, the project that Dan Savage started with his husband Terry Miller to tell gay teens that are bullied that later in life "It Gets Better," will be turned into a book.
Pre-ordering is available.
Hard sales start March 22, 2011 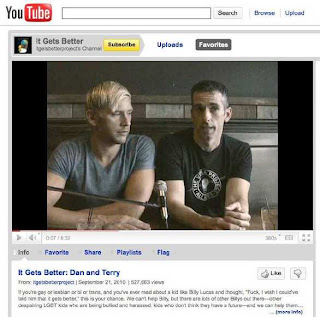 SAY WHAT?:
We love how RIGHT Dan always is.
Savage delivers a scalding, frothy quote on Santorum and all his whining.
If we were face-to-face with Danny, we'd plant a big ol' kiss on those pouty, puffy lips of his!!
Danny,   You get us all randy, frisky, amorous, hot and bothered when you get like this:  fervent gay rights vigilant!!  Keep talkin, baby....

"You have to love how Santorum is out there mewling about being the victim here and about civility—this from the man who compared people in stable, loving same-sex relationships to dog fuckers and kiddie rapists, this from a man who would make gay and straight sodomy illegal, ban gay marriage and any other protections for same-sex couples, and prevent loving same-sex couples from adopting children who need homes. This from a man who would literally destroy my family if it were within in his power to do so.

"And the 'Savage Love' gang? All we did was make a dirty joke at his expense. There has been no effort to strip Rick Santorum of his civil rights, no moves to nullify his marriage, no one has suggested that his children be taken out of his home, no one is trying to prevent him from having more children. No one has compared Rick Santorum to a dog fucker or a pedophile. Compared to Rick Santorum, my readers and I have been models of decorum and restraint.

"And don't think you're fooling us, Rick. Now that you're running for president—eight years after we redefined 'santorum' — you're whining to attract a little attention to your campaign and because your advisors think that maybe you'll get a little traction playing the pansy-assed victim card, à la Sarah Palin, and rake in a few bucks. Oh, look at all that mean gay dude—one of the guys I want to oppress—he's picking on meeeeeeeeeee!"- Dan Savage.