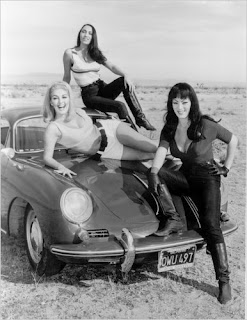 Cult star Tura Satana perished over the weekend, True or False?
Sadly, this is true.
The star of the cult favorite Faster Pussycat, Kill, Kill died in Reno, NV.
Satana was 72.
Many gay bois have a soft spot for this flick.  We know-- our hot beachpunk  ex-boyfriend*  educated us many a night-- endlessly-- on the finer points of this movie.  And we have majors in Film Studies.  Ha!
It's campy. It's "lesbionic"(Brian Kinney word).  It's 60s mod.  It was so NOW!, then.
This exploitation film was paid homage 10-fold in Quentin Tarantino's Kill Bill and Grindhouse (Death Proof).
Thanks to YouTube and DVD, this film will live on forever for future generations!
For Scott*:  Can we nominate this film for the Library of Congress National Film Registry??