Editors note:  We are not endorsing the GOP or Schock, we are merely presenting what we find interesting on the internet.  You are all adults that can formulate an educated, sound opinion. 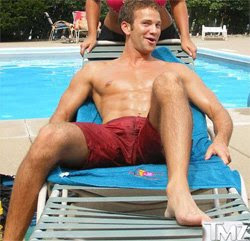 AMERICA'S MINDSET:  If you are a young, attractive male and SINGLE, are you GAY?
Of course DETAILS tries to put this age old question to rest for  GOP Congressman Aaron Schock, they've layered it under a lot of rhetoric and fluff.
The article in its entirety below:
One reason for Wallace's visit is that Schock is a curiosity—the youngest serving congressman and the first Millennial elected to the House of Representatives. With his carefully mussed hair, pastel ties, and resemblance to Neil Patrick Harris, he looks more like a West Wing politician than a real-life one—something Huffington Post readers recognized when they voted the kid from Peoria, Illinois, Congress' "Hottest Freshman." Wallace, however, doesn't seem as enamored of Doogie Howser, GOP. "I have two children older than you," Wallace says gruffly as the two make preinterview small talk.

The other reason Schock has drawn so much attention is what conservatives now refer to, in hushed, reverential tones, as "the Air Force One story." In February, when Barack Obama traveled to Peoria to stump for the stimulus bill, the president invited the congressman along for the trip, and lobbied him—privately, aboard Air Force One, and then publicly, during a rally at a Caterpillar plant—to vote for the bill. Maybe Obama figured that the freshman congressman would be an easy sell. But the day after the trip, Schock voted against the stimulus package, denouncing it on the House floor as a "skunk." In doing so, Schock became a GOP folk hero—a conservative Cool Hand Luke who looked Obama in the eye and didn't blink. "That was a true test of character," says John Shimkus, one of Schock's fellow Republican representatives from Illinois, "and Aaron passed it with flying colors."

By the time the interview winds down—after Schock has recounted the Air Force One story, addressed issues like Social Security reform, and commented on the bill he's introduced to mandate special elections for all U.S. Senate vacancies—Wallace's countenance has warmed. When the sit-down airs in Fox News Sunday's "Power Player" segment, Wallace has added a coda: "What about Schock's future?" he asks. "Governor Schock?" Pause for effect. "President Schock?"

IF THAT SOUNDS LIKE A REACH, well, such is the state of the Republican Party circa 2009. What has GOP insiders truly worried is that the future might be even bleaker: According to a recent poll, 18-to-29-year-olds who identify as Democrats outnumber those who identify as Republicans by 14 percentage points. If young voters maintain those allegiances into their thirties—when political preferences tend to harden—the Republicans could face trouble for decades. That's why party leaders are desperate to bring the conservative message to, as GOP chairman Michael Steele has put it, "urban-suburban hip-hop settings" and anywhere else the elusive youth vote might be hiding.

All of which makes Schock, hailed as a "bright, young rising star" by House minority whip Eric Cantor, the newbie to watch—or to grab hold of. "I've had Republicans come to me and say, 'Tell me how I should talk to young people!' as if it's some foreign language or something," Schock says between bites of a cheeseburger at Bullfeathers, a popular lunch spot on the Hill. He's equally dismissive of a GOP "hip-hop" strategy: "So does that mean we're going to, like, rap our message?" he asks. According to Schock, the party's youngest representative by six years, the solution to the Republicans' generational problem is pretty straightforward: "You have to go where the young people are," he says. "Most aren't picking up the New York Times to get their daily dose of politics. They're getting it online. They watch YouTube, they Twitter, they have Facebook pages—those are their means of communication. But a lot of older people just say, 'Well, young people aren't going to vote for me, so I'm just not going there.' Well, any time you write off a demographic, you're going to get your tail handed to you, as evidenced by McCain's campaign." Schock has tried to heed that wisdom lately—relying on Facebook and YouTube to spread his message and writing an amendment to the tarp oversight bill that requires the establishment of a website to track how bailout money is spent. But the truth is new media is as unfamiliar to him as it is to most of his gray-haired colleagues. Schock didn't sign up for Twitter until mid-March, more than two months after he'd been sworn in and five months after septuagenarian technophobe John McCain signed up. At press time, Schock had all of 95 Twitter followers.

ON THE ONE HAND, Schock's youth has been his calling card as a politician. On the other, he's never really acted or seemed young. "When my oldest son was buying dirt bikes and four-wheelers, Aaron"—the youngest of four children—"was buying stocks and rental properties," recalls Schock's father, Richard. Schock was in such a hurry to grow up that he wanted to go to college after his junior year of high school—but the Peoria school board wouldn't let him graduate because four full years of PE were required. Schock got his revenge—and his start in politics—the following year by running as a write-in candidate for the school board and winning. He was 19. He sprinted through college at Bradley University in his hometown, earning his finance degree in two years, and then, in 2004, defeated an eight-year Democratic incumbent for an Illinois state house seat, which meant adding Rod Blagojevich to the Rolodex. ("I knew everything in state government was for sale," Schock says. "He shook down my constituents in Peoria, so I knew it was on steroids in Chicago.") When congressman Ray LaHood (now Obama's secretary of transportation) announced he was retiring from the U.S. House in 2007, Schock outmaneuvered a host of local Republican insiders—including LaHood's son—for his party's nomination. After winning the GOP primary, he was all but a lock in the general election: The district hadn't sent a Democrat to the House since 1939. Schock was such a shoo-in that, unlike almost every other Republican in America, he actually campaigned with George W. Bush, whom he invited to town to host a $700,000 fund-raiser. He won the seat handily.

Schock's old-school conservatism has helped him make fast friends among the ideologues of the House Republican Caucus, which is led by people like Cantor (called "Mr. No" by Democrats for his obstructionism). Schock is ardently opposed to abortion and gay marriage—and he's got the requisite scorn for Big Government. Shortly after the Fox News interview, as Schock leaves the Capitol, a motorcade of police cars, SUVs, and a limo passes on Independence Avenue. He gawks like a tourist—but quickly spins the scene into a parable. "Sometimes I look around and I think, Man, this is a lot of money," he says. "Like, I know this is pretty perverted, but I think of, like, all these people working. I think, It all costs us money. You know, it's like the National Institute for the, you know, Study of Wild Animals." Once you get past the likes and mans and you knows, the future of the GOP doesn't sound all that different from the past.

ALMOST AS SOON AS HE WON his congressional seat, Schock threw himself into house-hunting in D.C. While he likes music ("everything from Keith Urban to Justin Timberlake to Rihanna") and extreme sports (his mother is still mad at him for sky-diving when he was in college), his true love is real estate. He bought his first property, a plot of farmland, when he was 18; back in Peoria he now owns a cluster of apartment complexes. In D.C., however, the dream townhouse he coveted never materialized, and he settled on a one-bedroom rental in a relatively unfashionable neighborhood near Nationals Park. Still, he plans to scour the listings again in a few months, when, he says, "a lot of Republicans realize they're not getting jobs, and things are going to open up."

Schock is hoping his romantic prospects will improve too, once he settles in. He's the only one of his siblings not married with children, and is similarly an outlier among his friends. "I had a group of five or six guys, and we hung out and traveled—ski trips and stuff," he says. "They slowly got picked off—married, married, married." His pals try not to dog him about his love life. "I think he's got enough pressure as it is," says Shea Ledford, a concrete worker who's been Schock's good friend since high school. Indeed, there's been enough speculation about Schock's confirmed-bachelor status that, as far back as 2004, a Chicago newspaper asked him whether he was gay (his response: "No . . . I'm not."). But D.C. receptions and fund-raisers where the other attendees are, as Schock notes, "two and three times my age" hardly make for a ripe pickup scene. Neither do the baby-kissing events back in Illinois. "There's no line of young ladies at my door every morning," he says. "Maybe when they read my Details profile . . . "

Right now, though, Schock's most immediate concern is the toll Capitol life is taking on him—not emotionally or mentally but physically. Afraid of the congressional "freshman 15," he says as we sit down for lunch, he tries to hit the House members' gym every morning. And although his six-pack abs were recently the talk of Capitol Hill after TMZ published a now-infamous picture of him in a swimsuit, he's worried; his workouts are often impeded by shoptalk and subpar equipment ("The House gym is needy," he says). It's not lost on him that his middle-aged colleagues on the elliptical trainers were young once too. "I used to be able to eat and drink whatever I wanted," he says as he deliberates over whether to order a Coke or a Diet Coke with his cheeseburger and fries. "But now, when I'm in a suit and tie all the time, sitting and being driven, you can just feel your body"—he puffs out his cheeks and spreads his arms like a balloon, then lets out a sigh. "I think it's also because I'm getting older."
If you enjoyed this post, other posts and enjoy reading LA*SURFPUNK HOLLYWOOD--Please take a moment to make a donation to keep this blog alive!!! You can click the donate button at the top right of the page. We thank you!!