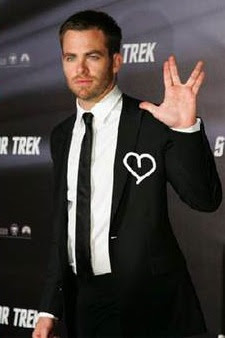 Actor  Chris Pine wanted to freshen and clean a messy situation.
William Shatner who played the original Captain Kirk in the 1960's  television series Star Trek was denied a cameo appearance in the new flick.  Shatner has been very verbal and upset about this lack of respect and rejection.
As you  may know Chris will be playing Captain Kirk in the upcoming summer film and the attractive thespian hunkered down and pulled out some purty stationery and penned a note to Shatner.  Kind of an olive branch between the two.
Pine quips:  "I wrote William Shatner a letter and explained who I was because I heard there was bad blood between him and the studio. I said, 'I'm just an actor who happened to get a role that happened to be James T. Kirk, and I'm not trying to usurp your status or anything'. He replied, 'Thank you very much for the letter. I wish you the best of luck.' I have it on my fridge."
Now that is just class.  It is SO nice to see some of the  younger Hollywood  generation not acting trashy like that gum-smacking-on-the-Oscar-red-carpet  Disney skank or  that Louisiana white scum  slit singer......
If you enjoyed this post, other posts and enjoy reading LA*SURFPUNK HOLLYWOOD--Please take a moment to make a donation to keep this blog alive!!! You can click the donate button at the top right of the page. We thank you!!