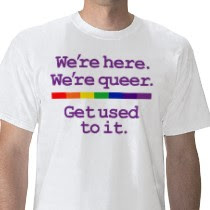 MAINE ITEM: The New York Times highlights the Maine marriage hearings: "The future of the bill, which has more than 60 sponsors, is uncertain. Gov. John Baldacci, a Democrat, had opposed same-sex marriage, but now says he is keeping his options open. The Legislature, where Democrats control both houses, can pass or reject the measure, or send it to the voters for a referendum. If the Legislature passes the bill, citizens can collect enough signatures to place a people’s veto of the legislation on the November ballot."
FINE LINE: In New Jersey, a poll offers the results of its voters on marriage equality: 49% in favor, 43% oppose it.
HUSH MONEY: In a police gay bashing incident, the City of Rochester is offering settlements to those involved:
NAME GAME: If one is gay in Uganda, the paper will out the individual.
PAPER WEIGHTS: Two papers in upstate New York pen op-eds in support of marriage equality.
POISON IVY LEAGUE: A Christian group ousts its leader for being gay at Cornell University: "A campus Christian group that receives funding from the student activity fee is coming under scrutiny after a student was asked by advisors to step down from its leadership team when he told them that he had openly accepted his homosexuality...Before joining the leadership team, Donohoe was vice president during his junior year. To enter a titled position in Chi Alpha, students must apply through the Hermans and demonstrate that they uphold certain values, including not engaging in premarital sex, and refraining from drinking alcohol and taking drugs, according to Donohoe. 'I thought it would be an awesome opportunity to be an openly gay man in a Christian organization,' Donohoe said. After Donohoe finished his term as vice president, he was going to be on the leadership team last fall. The Hermans told Donohoe that they were comfortable with his position as long as he did not engage in a relationship. However, after Donohoe met his boyfriend last summer and affirmed his acceptance of his sexuality, the Hermans asked him to step down from the team without consulting the rest of the organization," published the Cornell Daily Sun. The college paper also does an editorial about the fiasco.
THE PASS OFF: NY Governor David Paterson hands over the marriage equality bill to Senate Majority Leader Malcolm Smith in a public gesture. The mayor quips: "On this particular bill, there are a lot of other issues related to it. Senator Smith knows the inertia of the Senate better than anyone else . . . I'll stick with his final judgment."
Newsday presses: "Smith (D- St. Albans) supports gay marriage, but has said he would not allow a vote if defeat was likely. 'I'm very concerned about putting a bill on the floor that's going to be symbolism and not pass. . . . I'm going to count until I know that I have 32, if not 34, votes,' he said last week. After Paterson's comments Wednesday, Smith was asked for a response. Before he could reach the microphone, the governor quipped, 'Senator Smith agrees with me completely.' Smith replied, 'Absolutely.' ... Wednesday night, Paterson spokesman Peter Kauffmann said the governor had been 'consistent' in his statements Wednesday and last week. Paterson believes that legislation in general should be debated but was not demanding that Smith bring the gay marriage bill to the floor regardless of whether it had sufficient support, Kauffmann said."
BILL ADJUSTER: Connecticut legislators voted and amended the state's marriage bill to adhere to the Supreme Court ruling which legalized same-sex marriage.
"A spokesman for Gov. M. Jodi Rell said she will sign the bill, which passed 28-7 in the Senate and 100-44 in the House of Representatives, into law. While Rell, a Republican, signed the state's 2005 civil unions law, she has said she believes that marriage should be between a man and a woman. The bill comes six months after the State Supreme Court ruled 4-3 that same-sex couples have the right to wed in Connecticut, rather than accept the civil union law designed to give them the same rights as married couples."
The bill was also adjusted to satisfy religious institutions:
"....lawmakers endorsed an amendment that allows religious organizations, associations and societies to effectively opt out of the requirements of the law. That means that a group such as the Knights of Columbus would not be required to rent out its function halls for same-sex wedding receptions. Nor would a Catholic priest be obligated to preside over such a union. But both the House and Senate emphatically rejected expanding that circle of exemptions to include individuals and businesses such as florists and justices of the peace. To do so, they said, would be akin to enshrining discrimination in state statute."

PEREZ VS. PRAGER:
If you enjoyed this post, other posts and enjoy reading LA*SURFPUNK HOLLYWOOD--Please take a moment to make a donation to keep this blog alive!!! You can click the donate button at the top right of the page. We thank you!!