DO WE NEED TO SPELL IT OUT FOR YA? 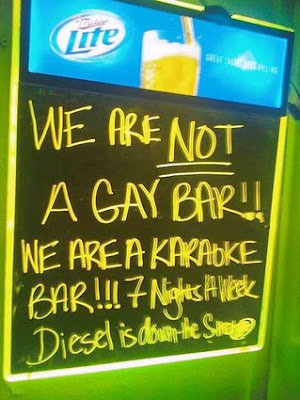 Karaoke and gays pretty much go together like shamana yap bamboo.....okay, please with the Grease reference.
Well in Peoria, Illinois at The Elbo Room, they don't want their karaoke mixed with them gays.
And the owner Greg Quast put up a friggin sign sayin so.
The Elbo Room was once a gay spot called the Quench Room.  The bar changed ownership but the gays kept coming after the switch.    "Although gay patrons continued to frequent the spot, tensions between them and the bar owner have boiled over recently concerning public displays of affection, according to the gay customers," states the Chicago Tribune.
Well after the sign went up, guess what happens:
In a flurry of forwarded Facebook, MySpace and text messages, a coalition quickly mobilized and dozens of gay rights supporters lined up last weekend outside The Elbo Room to express their outrage. The sign, they said, might as well have read, "Gays are not welcome here."
"The sign was basically a sign of intolerance, and we're not going to stand for it anymore," said Stephanie Worlow, 27, one of the organizers of the protest that drew nearly 40 people. "It's time that we as a community stand up for ourselves. We're not going to stand for intolerance anymore."
The group held three protests last weekend, one of which drew the attention of paintballers, who fired on the crowd. Police had no suspects in that attack.
[...]The bar owner, Greg Quast, could not be reached for comment. But he issued a statement apologizing for the sign, saying he's taken action to ensure it does not happen again. Van Auken warned that it better not; the city has already notified him the sign violated state law.